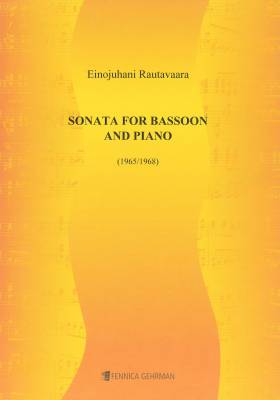 Einojuhani Rautavaara tells about his Sonata for bassoon and piano: "When bassoonist Emanuel Elola asked me in 1965 to write him a piece, I was excited by the task and viewed it as a challenge. Three years later I returned to the piece and wrote a new version. At that time I was in the process of slowly recovering from an unavoidable phase of so-called ‘experimental modernism'. This can be seen, for example, in the monologue for bassoon multiphonics (in other words chords produced via unorthodox fingerings) which appears at the end of the first movement, itself a dialogue between the bassoon and the piano. The work continues without a break with an Energico section, followed by a grotesquely romantic Barcarolle which complements the latter in the manner of a trio, and it is rounded off with a quick finale section. All this unfolds as a continuous narrative, since, looked at from one analytical perspective, the whole work can be viewed as a set of variations based on the twelve-note row announced in the first few bars. Here, as elsewhere, however, a ‘narrative' perception of the piece, i.e. one which follows the musical story being told, may be a more helpful way of approach the piece for the listener."