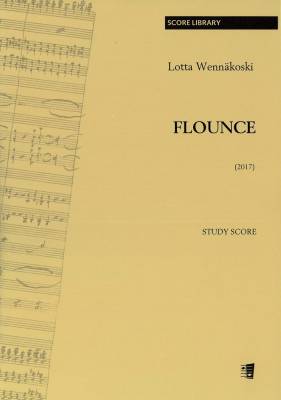 Lotta Wennäkoski tells about the work: "Sometimes it is the title that starts to guide the musical ideas of a work in the making. This was more or less the case with the short orchestral piece Flounce, written in spring 2017. I was fascinated by the different meanings of the English word flounce - both the verb and the noun. The piece is thus largely characterized by brisk gestures “non troppo serioso”, but it also has passages of lace-like ornamenting in a more lightweight and lyrical mood. The same kind of duality is present in the way I'm aiming to combine an often energetic pulse with (sometimes non-conventional) timbral ideas and a feeling of space in the orchestration.

Flounce was commissioned by BBC Radio 3. It was a great source of inspiration to know that it would be first performed by the BBC Symphony Orchestra conducted by Sakari Oramo at the Royal Albert Hall, as part of the BBC Proms 2017."

The orchestral material is available for hire from the publisher.