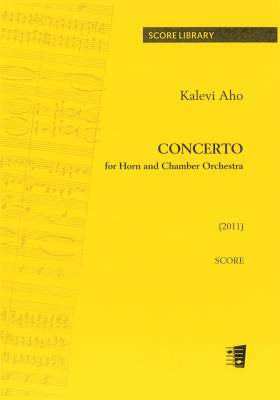 Recording of the concerto in Spotify / BIS-2036 SACD

One of the most ambitious of Kalevi Aho's composition projects has been to write a concerto for each of the main instruments in the Romantic symphony orchestra. In 2011, with the Horn Concerto (the eighteenth in the series) this project was approaching its conclusion. In the Horn Concerto the soloist does not stand in front next to the conductor but moves around several times during the course of the work. The horn's first entries are heard from backstage. After that the soloist becomes visible and plays from behind the orchestra, moving gradually from left to right while playing. In the end, the hornist leaves the stage again. This gives the work a ritualistic character - as if the solo horn brings something from afar to the audience and orchestra and, when all is said and done, disappears from view.

The concerto contains a number of sections of varying character, slower and faster. The fast sections are rather virtuosic for the orchestra as well. For the tarantella-like passage in the second half of the work, the soloist has moved to a position behind the winds of the orchestra, where an exchange commences with the orchestra's hornist. After that, the soloist moves to the rearmost part of the stage and, by the time of the final notes, is already offstage.