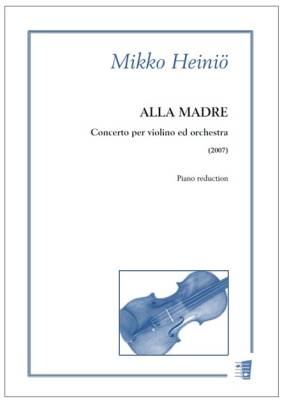 Mikko Heiniö's Alla madre (2007) abandons the traditional virtuoso concerto concept: here a large orchestra engages in dialogue with a solo violin. The first movement is called Arrivo, “Arrival”: the soloist literally arrives later, and by degrees, playing his/her first two solos offstage. Even then the orchestra continues to take the initiative for a long time. Not until the second movement, entitled Aura, “Air or Wind”, does the initiative pass to the solo violin as it sets light to notes in the orchestra harmony like individual lamps. And not until the end of the second movement and the beginning of the third does the solo violin play completely on its own. The title of the first movement, “Arrival”, underlines the event, the dramaturgy, whereas that of the second movement, “Aura”, alludes to the texture and the shimmering space. The third movement is the most strongly emotional, as the name Carezza, “Caress” suggests.

This product includes the solo part and the piano reduction (B4 sized).

The orchestral material is available from the publisher. The orchestration: 3(III+picc)3(III+ca)3(III=bcl)3(III=cfg)-4331-13-hp-str