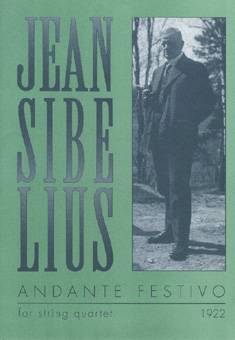 The Andante festivo is one of the most popular orchestral works by Jean Sibelius. Few are, however, aware that it was originally written for string quartet at around the same time as the sixth symphony. The Andante festivo was then performed in amateur academic circles from duplicated and hand-made copies, and was given its first semi-public performance at the wedding of one of Sibelius's relatives at the German Church in Helsinki. Sibelius was present on the occasion, which presumably inspired him to re-arrange it for string orchestra and timpani ad lib.

This latter version, which is now the better known of the two, was published in 1939 and has been preserved in a unique recording with the composer himself conducting. On 1 January 1939 Sibelius conducted it in a broadcast to the United States as Finland's greeting to the world fair then being held in New York. Its festive, seamless, singing melody looks ahead to the idiom of the sixth and seventh symphonies. Apart from the jubilee book, the original version of the Andante festivo for string quartet has never been published before. The quartet version differs from the later one for string orchestra not only in that it lacks a double bass, but also in that the final chords are in a low register on the violins as well. This edition is based on Sibelius's original manuscript.