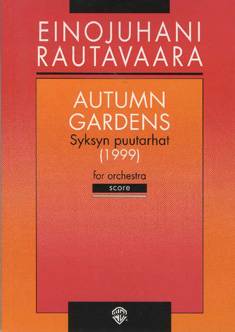 According to Rautavaara "The name of the work is a quotation from the libretto of my opera The House of the Sun: "...like a butterfly in a dark autumn garden...". The motif to which these words are sung is the theme for the variations in the first movement. Their texture gradually grows and becomes denser. Following on without a break is a slow, poetic movement of even rhythms and dynamics. The quick, lively finale begins giocoso e leggiero. But autumn is also a time of colour, and of death. At the end the music thus turns into a festive dance con grandezza. Maybe it bears the echo of a sarabande to the dying splendour of summer - or as T.S. Eliot put it: "late roses filled with early snow". Autumn Gardens was commissioned by the Scottish Chamber Orchestra and premiered at the London Proms in July 1999.