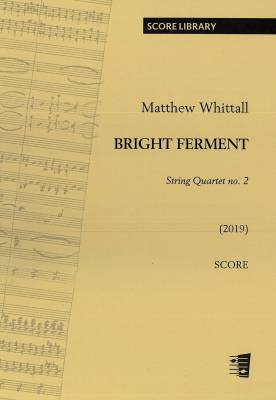 Matthew Whittall's preface to Bright Ferment (2019):
"I have a complicated history with the string quartet. Actually, it's not that complicated. I spent months writing a huge one in my early twenties and hastily withdrew it after a long delayed premiere, vowing never to write another. In a typical case of karmic retribution, my fear of the form would eventually be overcome by the unrefusable offer to write the compulsory piece for the Banff International String Quartet Competition in my native Canada. The short duration requested, about nine minutes, also felt like a good way to wade gingerly back into the medium.

The title was originally just a nice-sounding pair of words that surfaced in a brainstorming session with fellow composer Alex Freeman over an injudicious amount of fermented barley. When I looked it up later, I found that it was a phrase of older coinage, seemingly used more for poetic resonance than any fixed meaning. “Ferment” by itself denotes a state of confusion, change or lack of order. With “bright”, it takes on a more positive connotation with regard to society and creativity: a wild profusion of ideas barely checked by reason. (It may not actually mean that, but it describes this piece nicely, so let's go with it.) Fermentation in its trendy culinary usage is also hinted at via a recurrent “percolating” device of scattered pizzicati.

As one may guess from the tone of this introduction, there is little attempt at gravity in Bright Ferment, the only means by which I felt I could sidestep the historical and expressive weight of the string quartet genre. Styles, gestures and moods are tossed around, cross-cut and abandoned in stream-of-consciousness fashion, connected by little except an intuitive sense of “rightness” in their juxtaposition. If the piece acquires depth in spite of me, it will only be because its disparate parts amplify and strengthen each other simply by being together - much like the ensemble itself."

Bright Ferment was commissioned by the Banff Centre for the Arts and Creativity and the Canadian Broadcasting Corporation, with additional funding from the Americas Society (New York), for the 2019 Banff International String Quartet Competition.