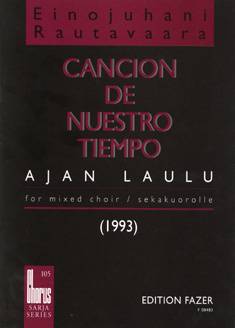 When the Tokyo Philharmonic Chorus approached Rautavaara with a commission for a major choral work, and announced their requirement that it should "relate to the world of today", Rautavaara responded by choosing some poems by Federico Carcia Lorca. Their emotional fabric, along with the way they deal with the themes of mortality and angst, seems to be closer to the present age than to the time in which they were written, the 1920's and 30's.

In the opening movement, Fragments of Agony, Lorca paints in his surrealistic fashion the harsh, inhuman world brought into being by industrial society and war. In the second setting, First and Last Meditation, the music symbolises the riddle of time. Dense textural fields are created, and when the poem announces that "Time now slumbers in its tower..." the various choral groups start up and end their contributions at arbitrary times, 'aleatorically'. In the last song, Sleepless City, the poem's outrageous images seemed to connect strongly with the actualities of 1993 that Rautavaara gave this movement the subtitle Nocturno del Sarajevo.