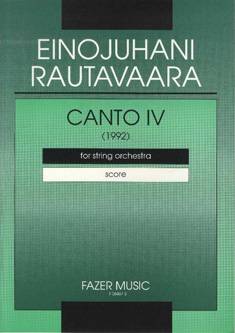 The Cantos are one-movement works which have accumulated into a cycle over many years. They are personal, even autobiographical statements ("snapshots from life's album") concentrating on separate moods in the manner of Pound's cycle of poems from which the title is borrowed. Canto IV dates from 1992 and reflects the composer's efforts at developing tight, logical forms through organic rather than architectural processes.