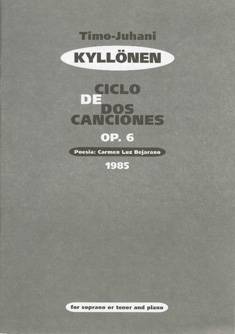 The work dating from 1985 is a set of two songs to the inspiring words of the Peruvian poet Carmen Luz Bejerano (in Spanish). The titles of the songs are Canción de Otono and Canción del Olvido, Song of Autumn and Song of Forgetting - the latter appeals to people not to forget the suffering child of the world.