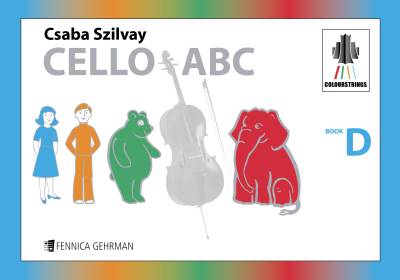 Cello ABC Book D is the fourth book in the Colourstrings® Cello ABC approach. With a few exceptions, the songs in this book are introduced in positions where the melody can be played with natural harmonics. Many of the songs are notated so that they may be played as a duo with the teacher or another student.
Books C (also available on iTunes Store) and D contain folk songs from at least 20 countries or regions. Duets also include short excerpts by Kodaly and Bartók. Here is a friendly way of wrapping technical work disguised in beautifu lmelodies from around the world - a veritable map of the cello fingerboard! The extended position is introduced via the use of harmonics: no finger pressure - no hand tension or strain. Shifting and melodies transposed to many different keys appear in positions 1-7. It is beautifully written with great illustrations and attention to detail.