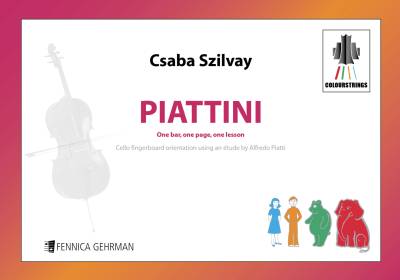 Patting: one bar, one page, one lesson. Cello fingerboard orientation using an etude by Alfredo Piatti.

Csaba Szilvay tells: ”This edition started when I was looking for a piece for a seven year old student that utilized the whole fingerboard, the Colourstrings® symbols (bird-moon-sun), and the first six positions. This Etude by Piatti met my teaching requirements, but it is traditionally a piece studied by advanced players. My colleagues told me that if I gave my pupil this piece, he would be sure to quit the cello! The result was, however, the exact opposite. It quickly became his favorite piece and after performing it well, in an exam, it gave him the motivation and courage to play other repertoire. When the Etude was broken down and presented to him one bar at a time, the challenge was not at all daunting. Having seen the results of presenting this piece in a simplified way, many colleagues and students became interested in this experiment.”