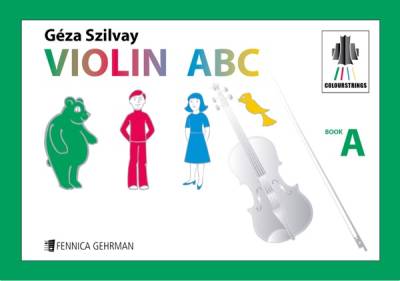 Colourstrings® Violin ABC is finally available in digital format! This is an epub publication.

Chapter 1: Becoming acquainted with the violin. Developing the basic holds, basic movements and basic rhythms on open strings. Left hand 'numbered' pizzicato. Chapter 2: Connecting the movements of the two hands. Natural (octave) harmonics. Chapter 3: Natural (fifth, fourth and third) harmonics in first position. Chapter 4: Introducing the line-system. The one-line stave.
About the Colourstrings® method:
Colourstrings® is child-centred. The materials are colourful, stimulating and entice children to embark on musical adventures that will enable each of them to fulfil their musical potential through fun and creativity, without pressure. It is an extension of the Kodály philosophy: everything starts with singing to develop inner hearing. Central to the approach is the role of play and imagination - often the value of play can be overlooked in the rush to get on with the ‘real' lesson.