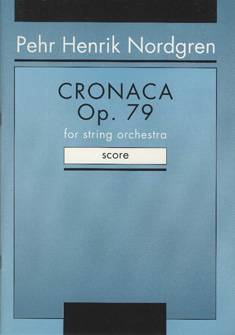 Cronaca must be regarded as one of Nordgren's most inventive and ground-breaking scores to date. The opening Adagio and closing Epilogo carry the weight of the musical message. The two soli from which the second movement gets its title "Duo" prove to be parallel manifestations of the same personality - two players but one instrument, duality in oneness - behind which the ripieno strings express diversity in pianissimo mobiles.