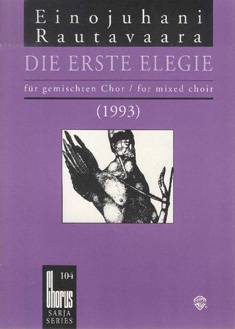 "My youthful encounter with the poetry of Rainer Maria Rilke turned out to be quite a discovery, not only in literary terms but also for the development of my world view. I still associate it strongly with the mysticism surrounding the ruins of post-war Vienna. It was there that I composed my Funf Sonette an Orpheus, and two years later in Cologne I started writing the song cycle Die Liebenden to Rilke's texts. From that time onwards I continued to carry with me - both mentally and in my suitcase - the Duino Elegies, Rilke's seminal work. Over the years I would take it out, finding myself particularly drawn to the first elegy, whose angel figure took on the role of a personal 'animus'.

My orchestral works Angels and Visitations, Angel of Dusk and Playgrounds for Angels are all musical personifications of this figure. Only as late as 1993, however, when the international choral body 'Europa Cantat' wanted to commission a large-scale choral work from me, did I feel that the time had come to set of angel elegy. It had evidently matured in my subconscious in the interim, since the process of composing the work was swift, eager and fluently self-assured. The basic pitch material is derived from four triads which together form a twelve-note row. The way this material is applied, however, stands in considerable contrast to methods usually used for atonal music. In consequence, the tone of the work is mellow even at its most dramatic; poetic, yet expressive." (Einojuhani Rautavaara)