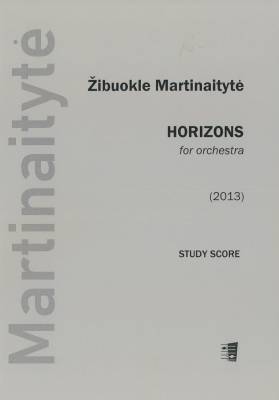 Composer says: " “Horizons” is revolving around the principle of several parallel stories evolving simultaneously as if reflecting fragmented states of consciousness that are so typical in current times and also expressed in various artistic forms. Examples that inspired me the most were the movies “Cloud Atlas” and “The Hours” and a book by Italo Calvino “If on a winter's night a traveler”.

Fragments of the multilayered narrative in “Horizons” emerge to the foreground one after the other without necessarily being obviously interrelated or having a consequential transition between them. They comprise a static layer, shown every time from a different perspective by nearing or furthering the musical object while retaining a stable harmonic point of reference or a dynamic layer featuring repetitive accelerating rhythms and frequent changes of elements. Throughout the piece, the listener undergoes a constant shift from one story to another, from one musical world to another, thus attempting to disintegrate the experience of a predictably logical sequence and to disrupt the linearity of time."