If on a Winter's Night a Traveller... - Solo guitar part — Concerto for guitar and small orchestra 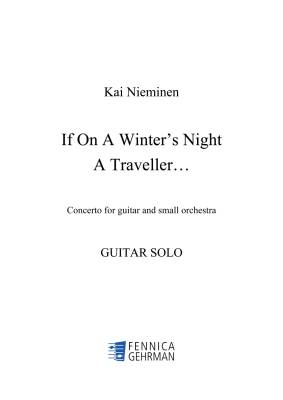 Kai Nieminen's Concerto for Guitar and Small Orchestra “If on a Winter's Night a Traveller” was
completed in the summer of 2009. The work is based on the title of the celebrated book by Italo
Calvino (1923-1985,) which has been in no small way an inspiration for the concerto, particularly in its mysterious and uneasy atmosphere of the opening chapter after which the book is named. The first movement is a homage to the Brazilian composer Heitor Villa-Lobos, which is also
reflected in the cadenza. The second movement shows Kai Nieminen's love of folk music, and
the Irish traditional melody “She Moved Through the Fair,” which he had heard me perform some years previously, appears in a somewhat modified form becoming a sort of funeral march, as a memorial to his late father. The third movement is a kind of lullaby, the gentle eighth-note triplet patterns heard on the guitar for a good part of the movement are a reference perhaps to the celebrated “Jesu, Joy of Man's Desiring” from J.S. Bach's Cantata BWV 147. Duration: c. 25'.

The orchestral material is available for hire from the publisher. The instrumentation is 12(II=c.ing)11-1100-01-str.