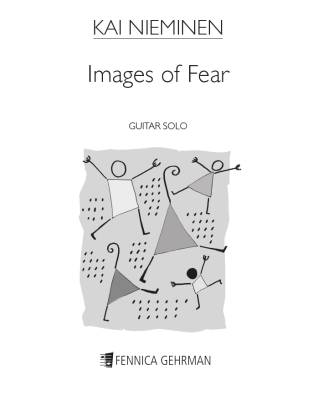 Kai Nieminen has been for a long time an admirer of the work of artist Paul Klee (1879-1940), and the solo presented in its final form here is influenced by the painting “Dances caused by Fear” or as it is often refered to “Dancing from Fear” painted towards the end of Klee's life in Bern, 1938.

In Kai Nieminen’s guitar work “Images of Fear”, there is only a very brief passage of calm at the very beginning, after which come three main connected sections in which a wide range of musically unsettling ideas emerge one by one, making use of the tritone, minor seconds, glissandos, tamboura, campanella, etc. The third and final section incorporates the grouping of 5 sixteenth-notes, to give an uneasy feeling to the music, with a short haunting and pleading five-note phrase (Cantando) heard immediately following this passage, before the work ends with further glissandos, and distant and diminishing harmonics.

As with Kai Nieminen’s other guitar works, the use of ‘orchestral colour’ is vital to the performance, and passages suggestive of for example brass, strings, woodwind, etc., should be taken into account and played with suitably considered contrast of tone.