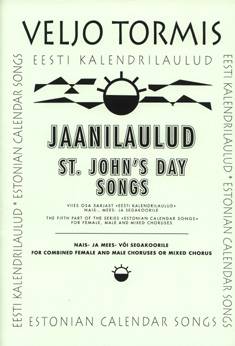 In them the male and female choruses form a magic contrast and together produce a beautiful sound that is both original and unusual. In the last of this set of seven songs (Jaanilaulud) the sopranos are divisi a tre, and each of the other voice parts split into two lines, for a total of nine vocal lines, moving in parallel major triads and parallel seconds and thirds. This song is one of those most frequently sung by itself. Texts are in Estonian and English singing translations by Ritva Poom are also provided.