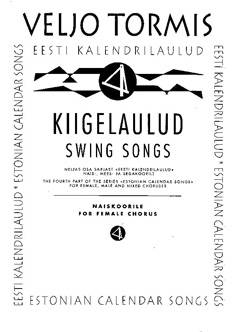 The Estonian Calendar Songs (1966-67) is one of Tormis's major works for chorus. It includes five cycles that can be performed individually: 1. Mardilaulud (Martinmas Songs) for male chorus, 2. Kadrilaulud (St. Catherine's Day Songs) for female chorus, 3. Vastlalaulud (Shrovetide Songs) for male chorus, 4. Kiigelaulud (Swing Songs) for female chorus and 5. Jaanilaulud (St. John's Day Songs) for mixed chorus. Each of the five groups of songs is concerned with the seasonal rituals and feasts of ancient farming people. In Kiigelaulud (Swing Songs) the girls converse with the swing, dreaming of suitors as they watch the countryside fly by. The texts are in Estonian and English singing translations by Ritva Poom are also provided.