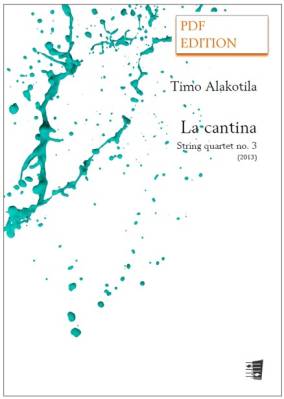 Timo Alakotila's La cantina (String quartet no. 3, 2013) was commissioned by a distinguished Finnish string quartet Kamus. The title of the quartet in four movements was inspired by the ongoing renovation in the composer's basement (ital. La cantina) after a water damage. The first movement leads from tentative dialogues to a powerful unison. The lyrical second movement (San Giovanni) is followed by a mysterious and wistful waltz. The finale (Fretta) rushes ahead all the way until the end.

Composer, musician Timo Alakotila (b. 1959) is a distinguished, active and versatile talent in the Finnish music scene whose long career working with different genres of music - folk music in particular - has been ground-breaking. Alakotila's works showcase his versatility: he has produced highly acclaimed classical music compositions and arrangements for Pekka and Jaakko Kuusisto, the Meta4 quartet, the Kamus and Tempera quartets, Eeva Oksala, Dalia Stasevska and Jorma Hynninen, among others.