La Rota (The Wheel) for violoncello and piano (PDF) 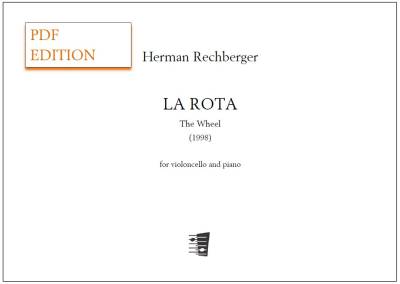 Herman Rechberger (1947-2022) writes about the arrestingly macabre background of La Rota for violoncello and piano (1998):

"The Italian word "La Rota" comes from the Latin and it means "the wheel" - in general, of course, but also specific things: hexameter, rotation; the eternally revolving wheel of fortune, or an instrument of execution common in the Middle Ages and Renaissance period. The condemned person was tied to the spokes of a wheel suspended on a pole and left to lie face upwards until he died of hunger and thirst. (The ravens did the rest!)

La Rota della Manfrediana was a well-known dance in markets in the Middle Ages (13th century). La Manfrediana was the slow introduction preceding the dance. In La Rota, the cello presents both themes, after which the wheel begins to revolve faster and faster, spun by the piano, until the movement comes apart at the end. The cello presents new material related to the spokes of the stopped wheel (inspired by paintings by Pieter Brughel and Hieronymus Bosch). Sunbeams shine off reflective surfaces, and the life of the condemned prisoner flashes before his eyes. The wheel transports him to another world. His wheel of fortune has stopped, and we hear fragments of the original La Rota theme."

La Rota was commissioned by the Finnish Broadcasting Company. It was premiered 7th March 2000 by Lea Pekkala (cello) and Heini Kärkkäinen (piano) at Musica Nova Festival in Helsinki, Finland.

Duration: c. 11'
Have a look inside by clicking "sample"! The PDF includes the score (= piano part) and the cello part.