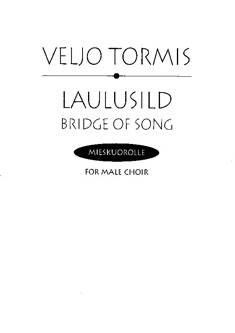 Texts from the Kalevala and Estonian folk poetry (text Finnish + Estonian). The concept of a Bridge to Finland appears already in old Estonian folk songs and the Estonian national epic Kalevipoeg. The Bridge of Song is a tribute to this symbolic bridge. The music of this Tormis piece is based on old folk tunes. All Finns know the first lines of their national epic, the Kalevala, just as all Estonians know the popular initial line of their epic, "Kui mina hakkan laulemaie" (When I start to sing). These are the two posts supporting the bridge of songs.