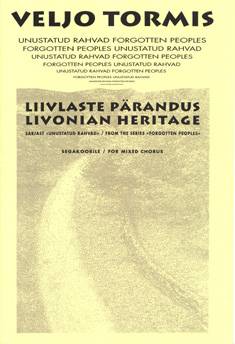 Forgotten Peoples was written over a period of twenty years, from 1970 to 1989, without being planned as a series beforehand. It contains six parts in all, each an independent work in several movements. In it the Estonian composer Veljo Tormis has incorporated elements of the vanishing folk tradition of the Finno-Ugrian peoples, melodies and texts more or less sunk into oblivion. "My creative interest earlier involved me in searching to identify the musical vernacular of my own people, the Estonians. Now a new, logically related theme was found for my creative mission: the fate of small nations," as Tormis puts it. The performing group chosen was the mixed chorus, a cappella. According to Tormis, a purely vocal treatment best retains the original form of folk songs - a principle that underlines all his folkloristic works. Liivlaste pärandus (Livonian Heritage) dating from 1970 includes a cycle of Livonian folk songs with texts in Livonian.