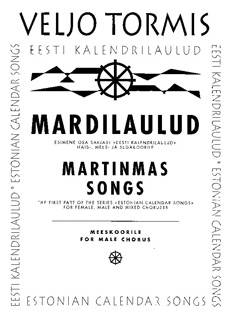 The Estonian Calendar Songs (1966-67) is one of Tormis's major works for chorus. It includes five cycles that can be performed individually: 1. Mardilaulud (Martinmas Songs) for male chorus, 2. Kadrilaulud (St. Catherine's Day Songs) for female chorus, 3. Vastlalaulud (Shrovetide Songs) for male chorus, 4. Kiigelaulud (Swing Songs) for female chorus and 5. Jaanilaulud (St. John's Day Songs) for mixed chorus. Each of the five groups of songs is concerned with the seasonal rituals and feasts of ancient farming people. Mardilaulud (Martinmas Songs) includes 9 songs about "Martinmas beggars" that made their traditional visits from house to house on Martinmas Eve and during the following night. The beggars were usually young single men and boys in disguise, and their rituals were supposed to secure the "luck of the crop" and the fertility of the soil. The texts are in Estonian and English singing translations by Ritva Poom are also provided.