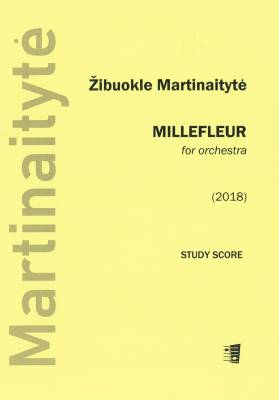 According to the composer "the French term millefleur, literally "thousand flowers" refers to a background style of many different small flowers and plants, typical to European tapestry of the 15th-16th century. The concept of a "thousand flowers" interpreted in distinct ways is found in various art forms of different cultures - in Chinese ceramics and Indian carpets as well as in the Italian glass technique called "millefiori", which has been known since the times of ancient Rome.

In this piece the background of a thousand flowers is comprised of multiple microscopic sonic gestures, constantly shimmering with harmonics in string instruments or subtle dynamic swells in other orchestral groups. Out of this gradually emerges a more pronounced main image, which later disappears into the background of flowers, thus forming a mirror-like compositional structure. The harmony of this piece is dominated by pure intervals - perfect fourths, fifths and octaves. "Millefleur" exemplifies an acoustic hedonism, a search for acoustic pleasures, as though walking through a beautiful sonic garden and taking delight in it."