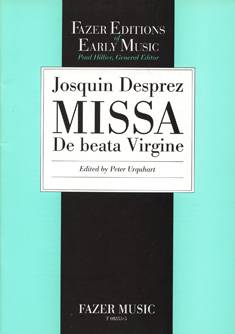 This is a modern performing edition of the Mass to the Blessed Virgin by Josquin. In the 16th century, this was the best known mass by the most celebrated composer of the day. It is a troped mass, with textual additions to the Gloria making it appropriate for a Marian service. It is also varied in style and demonstrates a mastery which is exemplary of Josquin's late works.

Published in the Fazer Editions of Early Music series - a choral series under the editorial supervision of Paul Hillier, founder and artistic director of the renowned Hilliard Ensemble. Although each title in this series is the result of careful scholarly research and is a reliable source for musicologists, the series' main purpose is to make practical performing editions available to choirs and other vocal ensembles. The original C clefs have been replaced by G and F clefs and the note values adapted to conform to modern practice. All the works in the series are intended for mixed voices. Each title includes a lengthy introduction in English and notes on the editorial principles. Where necessary, an English translation of the text and a guide to pronunciation are provided.