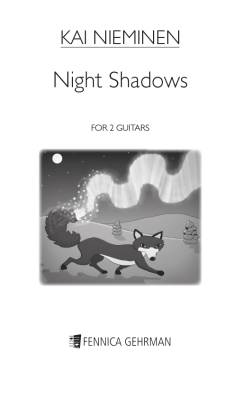 Having spent his early years living in the southern part of Finland, when he was 9, Kai Niemiminen's family then moved to Ylitornio which is in the western part of Lapland, not very far from the Arctic Circle.

It was in this environment the composer first became aware of the Aurora Borealis, or Northern Lights, those transient, magical and indeed delicate ‘curtains’ of light which appear often unexpectedly against the dark skies found in these latitudes in the long winter months.

The Northern Lights have been an inspiration to Kai Nieminen since then, with the completion of a string orchestra piece entitled I Can Hear Northern Lights in 1999, which is a reference to the idea that in the right situation, people have sometimes said that they can actually hear the sound of this mysterious phenomenon.

The beautiful guitar duet Night Shadows completed in 1997, is based on a series of early sketches, and bears the subtitle Dreams Within. Depicting the wonder of the Aurora Borealis, it is not a work for technical show or any kind of pyrotechnics. The composer advises that the suggested tempi be adhered to in order to create time and space for the colours to emerge in the music, and also stresses the importance of the dynamics as well as the understanding of the intervals and held (campanella) notes which all serve to bring atmosphere and expression.

In addition to the wonderment experienced from observing the Aurora Borealis, the composer also says the work is a reference to the “Fox Fires” which originate in a legend found in Lapland, or more politically correct the Sami people, where a magical fox is seen running through the snow, with sparks of coloured lights flying off its tail into the night sky.