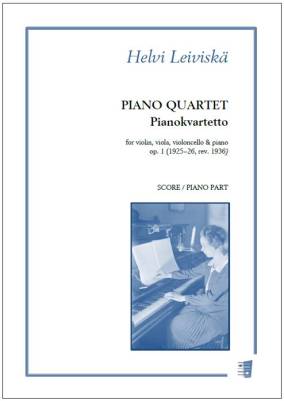 
Helvi Leiviskä originally completed her Piano Quartet in A major op. 1 in 1926 but revised it a decade later, in 1935. Written for the traditional piano quartet lineup (violin, viola, cello and piano), the work is in three movements and has a duration of about 25 minutes. It features religious and ecstatic imagery such as may be found in French, German or Russian neo-Romantic styles.

Leiviskä's Piano Quartet is considered one of the cornerstones of her chamber music output. Its early version was premiered in two parts at student recitals of the Helsinki Music Institute (the 1st movement in 1925 and the 2nd and 3rd movements in 1926). The revised version was performed in full by Timo Mikkilä (piano), Sulo Aro (violin), Ilmo Ranta (viola) and Pentti Rautawaara (cello) on Finnish radio in 1939. The work was also on the programme of Leiviskä's second composition concert in 1945, being performed on that occasion by Jussi Jalas (piano), Erik Cronvall (violin), Erik Karma (viola) and Yrjö Selin (cello). Two commercial recordings have been released (Finlandia Classics 2012 and Telos Music 2016). It is published for the first time 2022 with an extensive foreword by Susanna Välimäki. The product includes the full score (piano part) and a set of string parts.