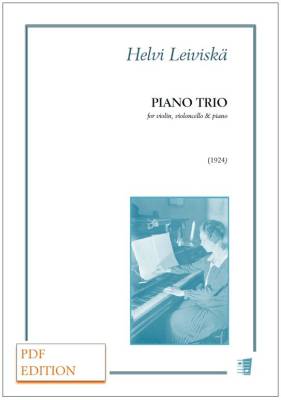 Helvi Leiviskä's Piano Trio is a powerful, youthful work that impresses with its directness of expression, its affective potential and its profound sonority. Leiviskä wrote the work while studying at the Helsinki Music Institute (1919 to 1927), completing it in 1924. It was premiered at a student concert of the Institute at the Swedish Normal Lyceum in Helsinki on the composer's 22nd birthday (25 May 1924). The performers were Leo Funtek on piano, Eino Raitio on violin and Ossian Fohström on cello. The work is also mentioned on her graduation certificate (1927) as one of her proficiency demonstrations.

The first movement (Allegro con fuoco) begins with a strong and sombre ‘quest theme' performed in unison on all three instruments. The second movement is in 5/4 time, which might perhaps be regarded as a reference to ancient myths and wisdom, as this is the metre of the traditional runo singing in the oral tradition underlying Finland's national epic, the Kalevala. However, the music soon escalates into a late Romantic outpouring of emotion, sucking in bits of the quest subject from the first movement, fugal sections and a ghostly waltz, as if the main character in the narrative were wandering in a labyrinth or meditating feverishly amidst a flurry of mental images.

Duration: c. 19'. This product includes the score (piano part) and the string parts as downloadable PDF file. Have a look inside by clicking "sample".