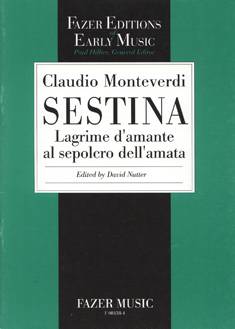 Modern performing edition by David Nutter. "Tears of a Lover in the Tomb of the Beloved" for five part mixed chorus with optional basso continuo figures prominently in Monteverdi's Sixth Book of Madrigals (1614). Telling of a shepherd whose nymph has died, the work was ordered by the Duke of Mantua probably in the memory of Caterina Martinelli, a nightingale ward of court who died at the age of 19.

Its six movements follow the Sestina form introduced already in the 12th century of six stanzas of six lines each with a closing envoy. Published in the Fazer Editions of Early Music series - a choral series under the editorial supervision of Paul Hillier, founder and artistic director of the renowned Hilliard Ensemble. Although each title in this series is the result of careful scholarly research and is a reliable source for musicologists, the series' main purpose is to make practical performing editions available to choirs and other vocal ensembles. The original C clefs have been replaced by G and F clefs and the note values adapted to conform to modern practice. All the works in the series are intended for mixed voices. Each title includes a lengthy introduction in English and notes on the editorial principles. Where necessary, an English translation of the text and a guide to pronunciation are provided.

There is no Rose
Hillier, Paul
Loose-leaf
Fennica Gehrman 2003