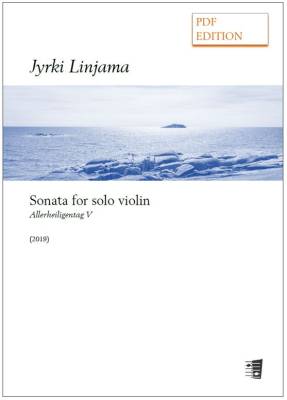 The material for Jyrki Linjama's Allerheiligentag cycle is a Finnish folk chorale for All Saints' Day (no. 146 in the Finnish Hymn Book). The first work in the cycle is a string trio (2007), the second a piece for orchestra (2009), and the fourth and fifth are solo works for viola da gamba (2018) and Sonata for violin solo (2019). The composer tells: "The choice of topic and material was originally influenced by the place where the string trio would be premiered - the old church on the island of Seili (Själö) in the Turku archipelago. The bleak history of the mental hospital on the island invited images of suffering and death. I got so attached to the fine, bleak melody that this series of works began to emerge."

Lasting 17 minutes, the sonata for solo violin has three movements, all of them embracing the folk choral material and Béla Bartók's influence in different ways. It was premiered by Kaija Saarikettu at the Kaustinen Chamber Music Festival in 2020.