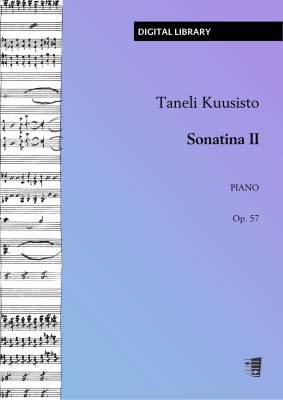 Taneli Kuusisto (1905-1988) was a composer and organist. In 1931 he graduated from the Helsinki Institute of Church Music and received a diploma in organ from the Helsinki Conservatory in 1935. He was organist of Töölö Church in Helsinki and worked at the Helsinki Academy as teacher of liturgical organ playing and music history in 1948-57. He became the head of the church music department and later director (1959-71).
As a composer he has his roots in the national romantic tradition. Although early in his career he showed some interest in Skrjabin and Sibelius, later he developed a neoclassical, linear style reflecting his admiration for Bach. The best known of his works are the songs and psalm settings, of which Suomalainen rukous (The Finnish Prayer) is best known.
Taneli Kuusisto's Sonatina II for piano op. 57 has three movements - have a look inside by clicking “sample”.