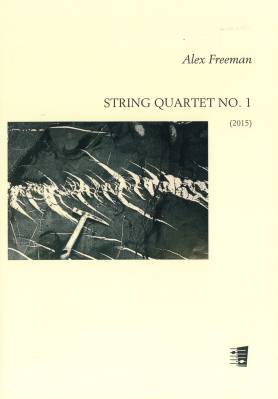 Alex Freeman found initial inspiration for his string quartet (2015) in a series of photographs a geologist friend showed him of en échelon veins in rock formations. The open strings punctuated with pizzicato unisons that begin the single-movement work call to mind something crystalline and shimmering, which is immediately infused with tumbling lyrical lines in something of a rapid caccia technique throughout. The middle of the work becomes more suspended in slower material loosely based on a technique of prolation canon, comprises layers of free, expressive, lyrical, and even elegiac music moving at different speeds. As the work concludes, the materials converge in a rhythmically pulsating stasis and an almost chorale-like statement.

This product includes the score and the parts (A4 sized). Available also as a downloadable PDF publication (product number 9790550166721).


American-Finnish composer Alex Freeman (b.1972) has established himself among the foremost composers of choral music in Finland. A dedicated citizen of his musical community, a teacher, and a choral singer himself, he composes music that reflects an appreciation for a wide range of aesthetics and a passion for communicating with listeners and performers. In his choral works, in particular, we find music that aims to be sonorous, melodic, and resonant, but is always crafted to carefully avoid the cliches that can burden conventional tonality.

His instrumental works run the gamut: a cantata with orchestra based on poetry of Whitman; a significant body of solo piano works that reveal deep roots in everything from austere absolute music to soaring elegaic rhetoric (see Albany Records, Inner Voice); his chamber work Blueshift (Navona Records), which is a kind of paean to Reich and Adams in miniature; open-ended modular works, like various iterations of his Slow All Clocks for electronic media, solo clarinet, and mixed choirs of kanteles; and, recently, some new directions in microtonal music.