Suite in A Major for String Trio — Score 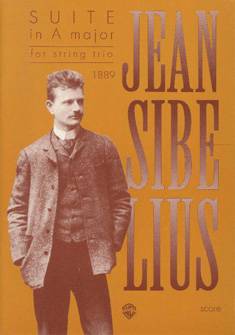 The Suite is a student exercise, first performed 13.4.1889 at a musical soirée at the Helsinki Music Institute. Ferruccio Busoni, who was teacher of piano at the Institute at the time, described the first performance as follows: "We sharpened our concentration as we realised that we were about to hear something quite beyond the usual standard for student works...". In the A major suite, colour comes to the fore for the first time as a major element in Sibelius's music. The emphasis on sonic texture is joined - somewhat unusually for such an early work - by a fairly bold handling of rhythm and harmony. Unfortunately only the first three movements of the suite have survived in tact. The concept of the missing Gigue has survived, however, and is included in this publication.