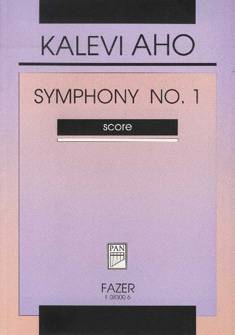 Aho's First Symphony developed out of work on a string quartet and was completed in 1969. It was his first substantial orchestral work under the tutelage of his composition teacher, Einojuhani Rautavaara. The four-movement symphony contains overt references to the two composers most influential upon Aho's style from this time period. Specifically, the contrapuntal mastery of the fugal designs in the first and fourth movements identify his deep appreciation of the music of J. S. Bach; the second movement is a waltz paced at a relaxed tempo of Allegretto, but suffused with sardonic humor particularly reminiscent of Mahler; and the Presto third movement may be best described as Aho's attempt to compose a contemporary-styled Baroque concerto grosso, filtered through Mahler (although features of Shostakovich's orchestral writing appear in this movement, interestingly, Aho claims to not have known the Russian's music at this time).

Despite these overt influences, the first symphony should not be viewed solely as the product of a student composer struggling to find his individual voice; on the contrary, attributes of Aho's mature harmonic language and skillful treatment of the orchestra pervade the work. In short, its successful reception in the concert hall may be directly attributed to the assured balance between Aho's characteristic artistry and these vital musical influences.