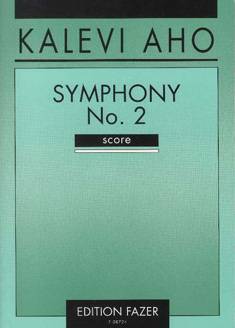 Aho composed his second symphony at the age of 21 when studying at the Sibelius Academy. Although the first performance in 1973 was a success, Aho was not fully satisfied with the work. He renewed it after 22 years and the new first performance took place in Tampere in 1995. By the composer's own admission, the work should be seen as representing his "anti-modernist" stance from this time period. Specifically, Aho had grown increasingly concerned with the trends of the avant-garde during the 1960s. He noted that "Tonality had broken down, melody had become a taboo subject, and musical form had become so fragmented that the formal logic of modern compositions was often very difficult to follow."

As a solution to this dilemma, Aho chose to use the fugue, a compositional process with a rich historical legacy, as the structural basis of each portion of the symphony, thus offering a means by which both inexperienced and educated listeners could follow the progress of symphonic argument. The single-movement second symphony is in three distinct sections, followed by a coda. It is suffused with thematic associations, both within, as well as between each section, thus engendering a subtle sense of small- and large-scale formal coherence to the composition. The first section is an Adagio. Its ponderous nature is compensated by the rather lighter section two, marked Poco a poco più mosso. The third section, a ternary-design scherzo, is clearly the dramatic center of the work. Following the quadruple forte climax that ends the section, the dynamic level and tempo decrease significantly, leading to the subdued, funereal-styled coda.