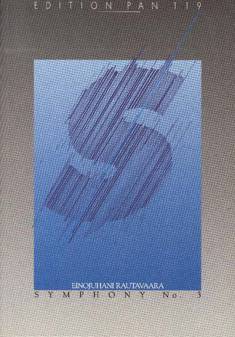 The Third Symphony written in 1959-60, constitutes a synthesis of the romanticism of the First Symphony and the modernism of the Second. The work is twelve-tone but does not aspire to total chromaticism: on the contrary, the twelve-note row generates the pitches and intervals but the music itself is shaped according to what, ultmately, are tonal laws. As a result, this symphony surprisingly harks back to Bruckner and German Late Romanticism. At the same time it is a genuine product of Rautavaara's imagination and his first real symphonic masterpiece. As in Bruckner's last symphonies, the orchestral forces include four Wagner tubas.