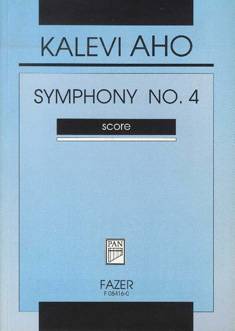 Aho's fourth symphony is among the composer's most vital compositions from his early stylistic period. It was largely written in Berlin during 1972, one year following his graduation from the Sibelius Academy in composition. Although the work is in three distinct movements - the first and third are adagios while the middle movement is a demonic scherzo cast in a presto tempo - in many ways the symphony is one of the most integrated and organically conceived of Aho's symphonies. The expansive first movement establishes the dark, tragic mood that permeates the symphony. The second movement takes on a decidedly more destructive bent: the vigorous material from the opening becomes subtly broken down during the orchestra's gradual crescendo, leading to a cataclysmic, violent climax that reverberates throughout the orchestra.

The movement hobbles to its conclusion using a slow and distorted waltz-like version of the opening theme. The third movement begins quietly; the tremolo figures by the woodwinds establish a harmonic texture which recurs by both the woodwinds and strings. The desolate mood is briefly countered by the virtuosic woodwind lines and massive climax in the movement's central section. The work ends with a final, extended statement of the symphony's primary theme, now played by the low strings, followed by the concluding tremolo texture played by the strings. The tragic tone that has permeated the symphony has now dissipated away; with it, the solitude of heaven reverberates beyond the final sonority of the work.