The 17. Rune of the Kalevala / Kalevalan 17. runo — Male choir/soloists/folk instruments 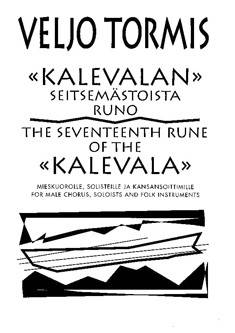 Kalevalan seitsemästoista runo (The Seventeenth Rune of the Kalevala) dating from 1985 is scored for for male chorus, soloists and folk instruments. The 17th canto tells a story about two figures in the Kalevala: Väinämöinen, the adventurer and Vipunen, the giant seer. In this work the two worlds of these figures have been conveyed by means of two themes originating in the Karelian folk songs. (Text: Kalevala, in Finnish).