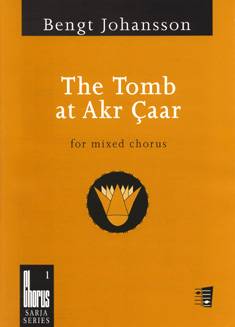 Johansson is recognised as being one of the most important choral composers in 20th century Finland. Many of his finest works were written for the Finnish Radio Chamber Choir during the 1960's, the decade when the choir itself was founded. The Tomb at Akr Caar and Three Classic Madrigals are both composed to texts by Ezra Pound, themselves steeped in the mysticism of Ancient Greece and Byzantium. Common to the texts of both works is the link with life beyond the grave, an aspect effectively underlined by Johansson's musical language. The solo voice part in The Tomb at Akr Caar is one of the most poignant in contemporary Finnish choral literature. Published in the Chorus Series (Ch 1).