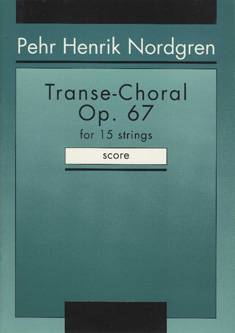 Nordgren has had a close partnership with the Ostrobothnian Chamber Orchestra, and much of his work is in fact scored for string orchestra. Transe-choral for 15 strings proceeds from timbre textures via unison passages to thick webs that finally clarify to become beautiful major chords. This work is in two movements. In the first, the parallel stream of consciousness coexists uneasily and a group of violins with retuned open strings is used to produce a cyclic figure in bare timbres, like revolving crystal. The second movement develops the idea of a melismatically-decorated monody to which the orchestration gradually provides depth. lt is taken up by a solo violin which alternates with passionate cluster-like passages, ultimately reaching a paradisiacal F sharp major chord on which the work closes.