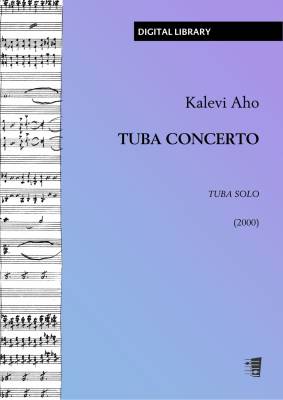 Kalevi Aho's Tuba concerto was premiered in Lahti, Finland in August 2001 by Harri Lidsle and the Lahti Symphony orchestra conducted by Osmo Vänskä.

The composer tells:
"By nature the tuba is a very songful instrument, and its melodic, cantabile quality is at the heart of the concerto. The instrument is also cap able of expressing powerful emotions, as on occasion the concerto features overtly operatic, impassioned musical gestures. Moreover, the tuba is technically a surprisingly agile instrument. Here, however, both the supervirtuosic aspect and also the use of innovative playing techniques are subservient to the cantabile element: in this concerto the display of technical brilliance is not an end in itself. Nonetheless, large intervallic leaps, played legato, and the wide range of the solo part mean that the piece is extremely demanding for the soloist. The only ‘new' playing technique to be used is simultaneous singing and playing at the end of the finale.

Many tuba concertos are rather short, and I thus decided to write a three-movement concerto lasting about half an hour - the sort of work that could hold its own as a solo item in the grand style in a symphony concert. The movements differ in char acter: the opening movement is mostly lyrically songful, whilst the second is fast - and also includes a solo cadenza. In the finale, slow and fast tempi are combined. Among the orchestral instruments, an important role is played by the tuba's little brother, the baritone horn, which on several occasions plays duets with the tuba or continues the tuba's phrases in a higher register."


Have a look inside the solo part by clicking "sample".