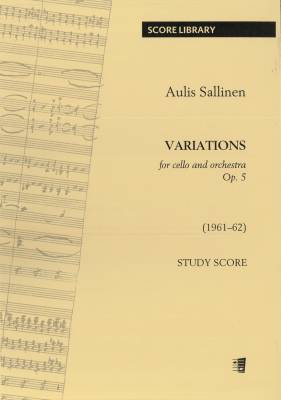 Aulis Sallinen (b. 1935) is one of the most famous Finnish contemporary composers. In his early instrumental works, Sallinen was still seeking to establish a style of his own. He had studied at the Sibelius Academy in the late 1950s, first with Aarre Merikanto - a composer representing a national brand of Neoclassicism - and then with Joonas Kokkonen, at that time just transitioning from Neoclassicism to dodecaphony. Twelve-tone music had won fairly widespread acceptance in contemporary Finn-ish music, and Sallinen was influenced, too. The Variations are Sallinen's first real work for the cello - an instrument that would later be one of his favourites, its warm, deep voice corres-ponding to his music's often dark undercurrent.

The Variations for Cello and Orchestra, Op. 5 were composed in 1961-1962 and premiered in October 1962. The basic motif consists of a set of three descending intervals stated by the cello at the beginning: D-D flat-F, C-B-G and B flat-A-F sharp. Their use as basic material is a ref-lection of the composer's dodecaphony-oriented period, and variation of this material provides the framework for the piece.

Variations for Cello and Orchestra are now published for the first time. Available are a reduction for cello and piano, study score and complete performance material with orchestra.