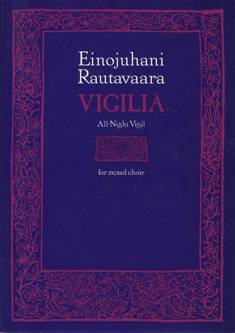 The All-Night Vigil ultimately stems from Einojuhani Rautavaara's vision-including childhood visit to the island monastery of Valamo in the middle of Lake Ladoga. The images and sounds re-emerged fifteen years later in the piano cycle Icons and again three years later when Rautavaara was commissioned to set the orthodox divine service, or All-Night Vigil. No instruments are used in divine services in the Orthodox Church, and because of this the composer wanted to use the choir in as varied a way as possible. There are numerous solos, the choir speaks and whispers, sings in clusters and glissandi. The variation technique used binds and structures all sections and songs of the work together into a vast and beautiful mosaic.