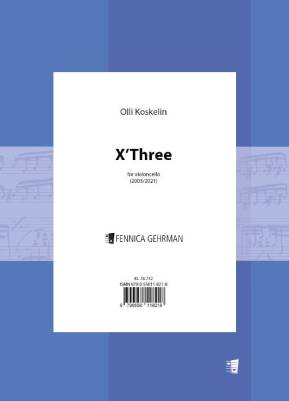 X'Three (2003/2021) by Olli Koskelin is the third piece of a solo cello suite consisting of seven compositions. Each of the seven pieces can be performed individually or detached with other X'-compositions. Different works are yet to be performed chronologically. The X'-works are composed by using the same material viewed from many different angles. Their structure can be seen as a film starting several times from the beginning and from the same settings always looked from a new perspective. In some compositions of the X'-suite seemingly random fragments are joined together organically in other works of the suite. The story, tale, or plot of the music and the gestures and figures of it trans-form in a new context but remain identifiable.

Olli Koskelin's (born 16 April 1955) compositional output reflects a wide range of interests. The vast area covered by his style encompasses the neo-impressionism of the piano work Courbures (1989) to the post-expressionist echoes of his Music for String Quartet (1981) as well as the breakneck virtuosity of his clarinet piece Exalte (1985/1991) and the rich romantic textures of his orchestral piece ... like a planet silently breathing... (1993). He often uses the overtone series like the French spectral composers and avoids dramatic culmination. Soft harmonics, tranquil arching melodies, a leisurely rhythmical pulse and a coherence of mood are in evidence in his later works as in Uurre (1997) for chamber ensemble, Miniatures (1997) for string quartet and Circles within for 19 solo strings.