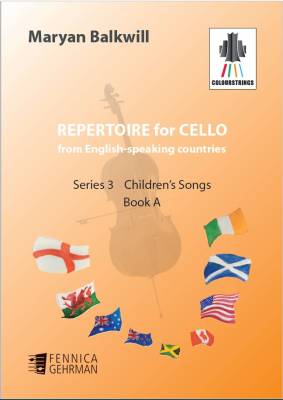 SERIES 3 BOOK A "CHILDREN'S SONGS"
Colourstrings is an internationally known and respected approach to string teaching. It was devised in Helsinki in the 1970s by the Hungarian brothers, Geza and Csaba Szilvay. It is based on the teaching of Zoltan Kodaly (1882-1967). For obvious reasons, Finnish and Hungarian folk songs were selected to form the basis of the Colourstrings teaching material.

This collection of repertoire books contains Maryam Balkwill's selection of songs from English-speaking nations which are considered to be suitable for adaptation to the teaching methods of Csaba Szilvay's Colourstrings Cello School, and are designed to complement it.

There are explanatory guides in each volume for teachers and parents. The style of these series of books will be familiar to Colourstrings teachers, but they are also designed for all cello teachers so that more students will be able to benefit from this unique approach to teaching.