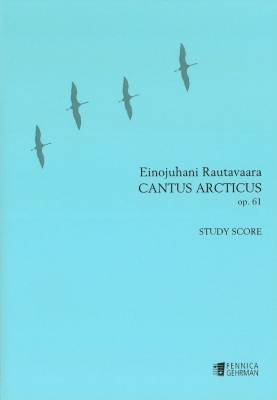 Cantus arcticus, concerto for birds and orchestra composed in 1972 is one of the most popular works by Rautavaara, warmly romantic and colourfully impressionistic. It it the orchestral texture is interwoven with a counterpoint of taped birdsong which Rautavaara himself captured in the marshes of northern Finland - although the sound of the birds has undergone little processing. As a result the northerly birds and the symphony orchestra engage in a constant dialogue. The closing movement, Swans Migrating is a big crescendo produced on the tape by magnifying the superimposed cries of whooper swans to create the impression of swelling numbers. According to Kalevi Aho the work contains some brilliant musical invention, such as the entrance of the marsh birds after the woodwind introduction, and the entire second movement, Melancholy, in which a mournful, plaintive lark is accompanied by tender, comforting string figures in the minor, like a distant echo from Sibelius's Swan of Tuonela.

The performance material is available for hire from the publisher.