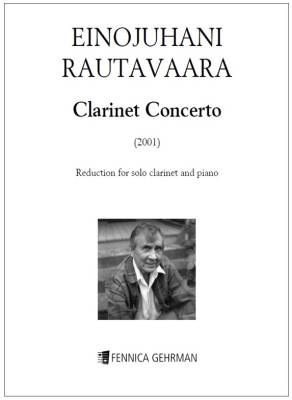 "The composition of the Clarinet Concerto was decided back in April 2000, when I visited New York to hear the Philadelphia Orchestra perform my Eighth Symphony at the Carnegie Hall. I met my future soloist Richard Stoltzman and the representatives of the commissioning trio: Theodore Friedman, International Arts Foundation and the National Symphony Orchestra – suitably detached from the ground, on the eighteenth floor of the Parker Meridien Hotel. When Dick Stoltzman later visited Helsinki twice, I was able to play and study the three movement concerto with him, while still composing it, and discuss the emerging problems.
At the opening the atmosphere is dramatic (Drammatico ma flessibile), the solo voice gradually rising up from orchestral eruptions. The horn suggests a cantabile theme which the clarinet starts to develop, making it more and more ecstatic. At the opening the relationship between the solo and orchestra sounds almost aggressive, but now a common line has been found. After a culmination there follows a cadenza, in which the latter part is left (as in early classical practice) for the soloist to compose. But the dark-voiced brother, the bass clarinet, joins in and leads the music back to cantabile. For a moment the eruptions of the beginning return, until the tranquil mood gets the upper hand and the movement closes peacefully. But in the finale we will hear that the conflict has not yet been resolved: we come back to it again.
The slow movement, Adagio assai, is a continuous poetic narration, in which melodic beauty is sometimes capable of telling us of deeper and more serious things than any tempestuous drama. The finale, a speedy Vivace, returns to the dramatic world of the opening movement. There are new rhythmic variations on the motifs encountered in the first movement: now they are virtuosic textures full of action. It is obvious that Richard Stoltzman's co-operation at the composing stage was essential for many of the technically demanding passages. But the lyricism of the slow movement was also, in a way, a result of the exceptionally soft and expressive sound of his clarinet. Therefore, I decided to dedicate the concerto “to Richard Stoltzman and the sound of his clarinet”."

This product includes the solo part and the piano reduction.

The performance material is available for hire from the publisher.