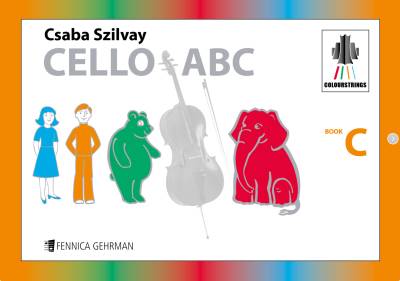 Cello ABC Book C is the third book in the Colourstrings® Cello ABC approach. Many of the songs are notated so that they may be played as a duo with the teacher or another student. Books C and D (also available on iTunes Store) contain folk songs from at least 20 countries or regions. Duets also include short excerpts by Kodaly and Bartók. Here is a friendly way of wrapping technical work disguised in beautiful melodies from around the world - a veritable map of the cello fingerboard! The extended position is introduced via the use of harmonics: no finger pressure - no hand tension or strain. Shifting and melodies transposed to many different keys appear in positions 1-7. It is beautifully written with great illustrations and attention to detail.